OK...so I am not the correct person to point out typos. but this was hilarious. In a 3 line mail, i get 'beast wishes'. well..if you wish so!!
Things seem to be materialising for my trip next week to cal...some more college frnds dropping in at that time, so we plan to meet! yay!
Saw Harry Potter yesterday...a good movie after a drought of too long! It is well made. The essence of the book has been captured, while efficiently removing all that could be removed. More about the adventure and the story, the book does not really delve into the characters, and could have done a lot more with some of the characters and fine actors - Ron and the weasley brothers...and Cedric. Voldemort is good...and Im talking of the make-up here too!
All in all, a good entertataining movie, which I enjoyed, and where the special effects are good, and yeah - the director steals the show.

However, the result of the movie was ended up sleeping damn late - 3am..and waking up today was a problem. Thankfully there was inspiration to come to work - tomorrow is a holiday! Sigh! the things we tell ourselves for motivation! 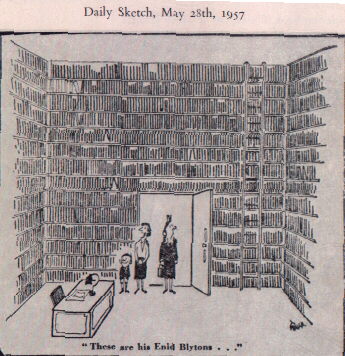 This is what I wanted when I was a kid...and still hope to have someday. I really love the way Blyton caught my fancy, in fact triggered it.

I can attribute my love of books to Enid Blyton (discounting my genetic predisposition of course!). After graduating from Disney comics, or rather, while I was still into reading them, I walked into the world of Blyton, and British children. I still remember the cover of my first Enid Blyton when I was in Nasirabad (Rajasthan), which I read myself - The Mystery of the Strange Bundle, barely understanding anyhting, at the age of 7.

Then began my voracious EB reading - right from the Green Story Books to the complete Mystery and School series.

There are many critics of EB. But she was right when she said criticism from someone older than 12 yrs of age didnt count. As a kid, it was more important to read about the freinds, the way they teased each other, their jokes, the fun, disguises, the food...than the actual mystery, which began after half the book was read.

I personally think there are very few writers who have managed to make hostel and school life as interesting as she has. Making each character one dimensional also helps a young person identify with any one of them. Who can forget the thrill of reading about the pool side midnight parties, the games of lacrosse, petty quarrels, and ambitions.

She actually wrote about youngsters who will be adults, and are shown in a fun way the right and wrong ways of thinking. THe importance of freindship. Romance will come with age. No need to make the kids read about it! Let them enjoy with animals and disguises, food and travel, adventure and mystery, and the most sought after thing - being smarter than an adult! (or in case of the school series, learning how to behave like one)

My favorites were, and are, the Mystery series and Malory Towers...apart from the faraway trees, and Enchaned forest...those cme uder a different head altogether.

I like the way she wrote. No fuss, it was about a gang of kids ahving fun. No morals pushed down your throat. Crisp, without too much language, correct English, and just that much information as kid may find interesting. YEp, she caught my attention! Here were a bunch of real life kids having more fun than me!

Her language was just right - not too complex. No big words. and if anything mildly difficult came up, there was Bets to help you. I remember being flummoxed by 'Ventriloquist', but thankfully, Bets helped me out, as with 'Disguises' and some of the french!

Yep, I still love Enid Blyton. There are people sho have said she was a child molester. Well, I dont know about that, and will not comment. I will say she was a Darn Good Book writer!

Then of course, with this age and day, who can avoid being called a sexist etc. So has EB. I will say I got fairly bugged by her girls always being told to stay back by the elder brothers and frnds. But then in the time and age she was writing, I think she tried being as fair as possible. In the school series the girls all do everything themselves. Never meek, helpless or too engrossed with ...basically not being the un-liberated woman. Then in the famous Five series was George. Poor Georgina, born in a time where only men were the strong ones allowed everything, it was OK for her to want to be a guy! I empathise!

In my mind she covered almost every aspect of childrens writing - mystery, adventure, fantasy, short stories, toys, farm based stories...anything and everything!

If at her time there was as much media and well, globalisation as today, I wonder what would have been her sales volumes...and thr number of movies. As it is, there have been enough TV serials and movies made on her books. Or maybe she would have been effectually unnecesasry criticism, and accusition of racism etc.

Whatever it is, I am and will be a loyal fan of Enid Blyton  my childhood companion provider. It is too little a space to write about all that I can say about her books!
'Are you a Bengali??'
I was faced with the question yet again a few minutes earlier as I was sipping my cup-o-tea and hoping no one would ask my expert comments on some Bong woman who appeared in KBC a few days ago. (For the uninitiated KBC is Kaun Banega Crorepati, the Indian version of Who wants to be a Millionaire). Now, I dont watch KBC, and do not have any intention to answer its questions, least of all, when it concerns Cal, and when all i want is a break - a cup-o-tea.
But then when you are asked which part of INdia you hail from, by someone in office, you cant be rude. So I resort to one of my patented standard replies.

Recently there has been a spate of ppl who have said 'You look like a Bengali'. But that is, Ive found more of an exception than the rule, especially true for those who have a) heard me speak Bong, b) talked about something bong with me, or c) have seen me dressed in something which makes me look Bong (kajal, jhola, jeans n kurta, the typical works) and so on.
But today was the best. It is the culmination of my Gujju-ness. When a gujju woman, H ... well, read on!
A: Chalo yaar, chalech phir
R: what was that...Hindi, Gujrati...?
Me: He he... That was Hindi pretending to be Guj, but ended up being Punjabi
R: ha ha...Jat u mean
Me: Yeah! Not that I claim to know Guj.
H (aside to me): D, youre not Gujrati? Or are you? [H is a pukka gujju, 40 odd woman]
Me (startled): Me? Oh no, no!
H: okay, wher are you from?
Me (startled smiling): Im a bengali....from Calcutta
H: You are a Bengali?!! You dont look like one.
Me: okay...well, the view is divided. Some ppl guess Im bong.
H: yeah...perhaps because you know the Bengalis Ive met have nice (voice fading) hair.... (stops embarassed)
Me (laughing): yeah, I dont have the typical nice, silky hair, fair, flawless skin and big eyes :)
H: He heh...ye...he he..no...i mean..he he
(finishes coffee and leaves)
I walk off laughing!

Well, I suppose the cost of staying outside Cal for most of my life **winking**

Well, the point is, it is interesting to see the views of different ppl. Apart from guessing correctly, there is this group who think Im either from South India, some call me Rajasthani (whew!), and then there are those who go so far as to call me Punjabis (havent they met the sharp featured Punju babes?). And now today Ive been Christened Gujju - Aaaaaaaaarghhh! (well, Gujju babes are sposed to be hot.)

Looking at the above paragraph, I think I can safely (**please dont interrupt**) assume there is barely any accent in my Hindi, and now Guj, and, well, English is pretty much Indian. AND. Im cosmo enough in my behavior! At least to confuse some ppl in India.

PS - I should have left the comment button de-activated!
Collapse