To continue from yesterday. First things first. Heres a photograph of another one of those dainty fire alarm systems. Please note the only instructions present. You may also note that I did exactly as it said. It said 'Break Glass. Press Here' I did. 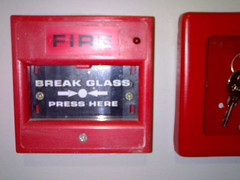 Now, to continue.
Well, I rushed into the pantry frantically trying to remember the Admin person's name. In the end I called up the Board.

Meanwhile I expected rushing feet, horrified coworkers running about, trying to evacuate and later, lots of questioning regarding that alarm.

Phone picked up. The lady there instantly recognised me.
Dips?
Yeah. The alarm?! (I gasped)
Its shut. (she singsongs)
You shut it?
Yeah! (singsong again)
Oh. Okay. Great. (I blunder)

Shaking, I picked up my cup of tea, looked at the mildly interested group sitting around the coffee table and make my way to my desk.

We Indians are a staid lot. Fire? We ask. Show me and I will believe you.
[I remember the last time there was a real fire. It was on the 3rd Floor, after 7 pm, people had flocked to check the reality, and even taken the stairs in the morning to satisfy themselves. The putrid smell along the stairs was not enough proof they said.
In Ahmedabad I remember when an under-construction building was blazing, everyone rushed to the nearest window and cheer the few with the fire extinguishers, while lamenting their inability to 'be there'. Clips and phototgraphs taken covertly were immediately circulated within the organization, and more people flocked the site.
Fire?! Bring it on! We want some.
Anyway, I meander.]

Next to my desk, the Chief Information Security Officer (CISO) looks up at me and smiles - 'Did you press the Fire Alarm' he jests.
I put down my tea, took a deep breath, contemplated repurcussions of owning up to the main person involved in the security measures, and said, very deliberately, "Yes."

The look on his face was worth watching.

So I recounted the episode to him, modifying it a little to save myself. He wholeheartedly agreed saying the glass was too thin, ergo, a replacement of vendor is required and a check of all the security systems in the company. *Dips is relieved and happy at her good fortune at getting away at least on one count*
Apparently the presence of a social organization in the same perimeter has resulted in no fire drill for some time, and glass breaking has caused another such alarm in the near past. Thus the instantaneous stopping of the alarm.

The Floor Security head popped in after a while. Was it you? He looks at me and laughs. Ermm... yeah?!
Oh..kay he grins. Dont do it again he admonishes and listens to the CISO recount my tale to him. He gives me another friendly grin and says 'dont touch that one again, well put it together with tape till the new vendor comes' and walks off laughing.
[That CISO is a good chap, all said and done]

A few minutes later, I get a call from the Board.
Dips?! You bad girl!!
what? What did I do now?
You dint tell me it was you who pressed the alarm
erm.. er,.. when?
When you called me stupid. You should have told me. I would have come down and listened to you. Now I missed it.
eh?
Must have been your nailpolish that made you do it. Red affinity to red you know *she chuckles*
*me laughing almost hysterically*
Next time you do it call me
But but. *i protest* I didnt mean to! It was accidental!
Liar! I saw it minutes before you came, I was standing right there. It was perfectly fine, sealed and new.
No! no  no... it was damaged, I try hard to convince her
Anyway! you tell me more about it later ok?!

I keep down the phone and see another co-worker looking at me absently while i try to wipe my eyes. Whats up? He says
er...fire alarm, you heard it?
What fire alarm?
You dint hear the blaring?
What blaring?
I picked up my tea.

Later I go to the loo, another colleague there, I told her the story.
Her response?

You lucky person!!! I wish I was there! Ive alwyas wanted to do that! How did you??! Now I wont be able to do anyhing for so long. Next time Ill take you along, ...

Sure it was fun. That panic was fun too.
I mean, in any other company I probably would be slaughtered for doing something like this, but here, it was practically unnoticed. I think.

Anyway, the point is, Ive always wanted to do something like this. It almost killed me for a few minutes. It was an awful risk in a staid corporate environment. It made every second last minutes. But I always wanted to do this. These fire hoses were tempting till we used them in IMI during Holi.
Now that I know what the siren is like and how to press the glass, Im Satisfied on this count too.

As for it being intentional or not, well, look at it this way. Everyday while on the phone at that spot, I would casually press it lightly, knowing that pressure will not break it.
Maybe all that accumulated pressure made the glass weak?
Maybe when you are in hurry, and excited, you do not realise your own strength?
Maybe, just maybe, I did what I was thinking of doing for quite some time?!

Whatever it is, I stay a meter away from any of those devices now. And thats final. Ive, so to say, Been There, Done That.

How much money would the telecom brand lovingly known thru India as 'hutch' have spent on branding i wonder.
As the indian co in which Orange had a stake it created series of award winning advertisements and found a niche in the mind of the cluttered indian public. To the extent the word 'hi' came to be associated with it. Later, the famous dog and kid would become part of indian history.
When orange exited, the warm glow was replaced by an electric pink which though not loved was unique enough to be associated only with hutch. Quite difficult in unexp world to create a niche where a colour reminds you of a brand!
Now, thanks to vodaphone having taken over, we see the third wave of advertising. Red this time sound. With an overused tired looking pup peering out of its hutch, it will take a lot of effort to recreate what the initial brand had wrought. To top it, the red and white of vodaphone is already the defining colour of airtel the largest single competitor to hutch, with its signature tune by rehman.
Hutch has always commanded a slight premium in pricing in a cost competitive indian telecom market. Till now i did not care. I liked hutch. Somehow. Now, i dont think i care. It looks too much like anything else, its uniqueness overused and were it not for the switching pain of change in number, i gladly would.
I an sure so would many other users.
What do you say to that Vodaphone?
Collapse